The government of Yemen received a number of M113 APC via US aid to support internal security and counter terrorist operations. 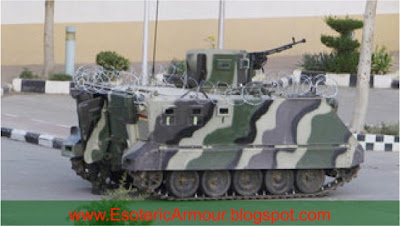 An initial delivery of 32 M113 (versions unknown) occurred in 2006 (SIPRI) as part of a US aid package.   Recently leaked diplomatic cables (via Wikileaks) dated late 2008 indicate that the US sought to supply further M113 to Yemen.   However due to lack of available US stocks requests were sent out to other M113 operators in the region to check feasibility and availability for  third party transfers to Yemen.  The outcome of these requests is unknown.


Some sources suggest that Yemen has been an operator of the M113 in large numbers since the late 1970s, however I cannot verify this.

In late March 2011 at least three individual M113 were deploying to guard the Yemeni Central Bank in Sana’a to counter protesters. 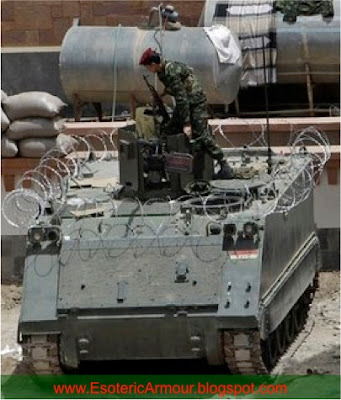 These vehicles had a number of apparent modifications.  In the rear crew compartment three visor blocks were installed on each side, along with firing ports under them.   What appears to be a DSK(M) heavy machine guns has been installed and the associated firing position partial enclosed by protective plating with vision blocks.  Razor/Barbed wire also surrounds the top of the vehicles, a feature seen on some other Yemeni army vehicles during the uprising. 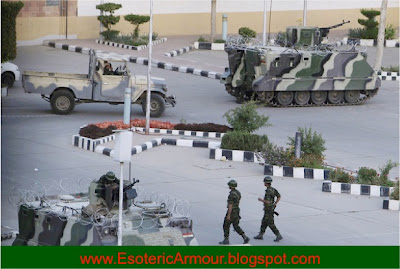 A number of Yemeni Government M113 have been either captured or destroyed in recent years during the Shia Insurgency in Northern Yemen, led by the Houthis group (Al-Shabab al Mumin)

The following images have  captured from three seperate videos  (hence the quality) believed taken by the Houthis group: 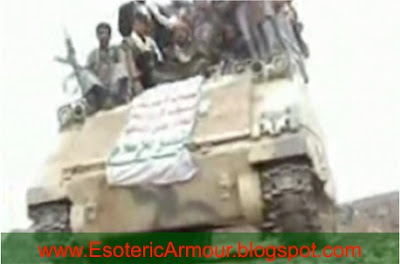 A captured M113, possibly a very early production model (thin headlight guard), operated by Houthis fighters in 2008.  The banner on the front of the vehicle displays their motto which translates to " God Is the Greatest. Death to America. Death to Israel, a Curse on the Jews.  Victory to Islam ” 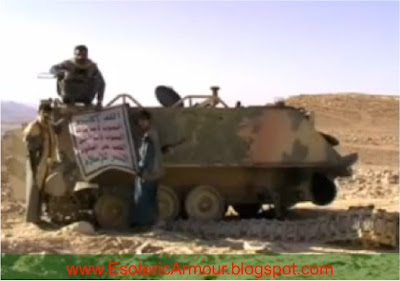 An immobilised M113 in 2009.  Houthis fighters again displaying their motto. 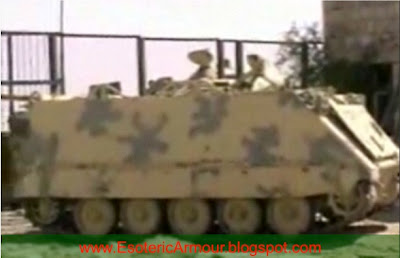 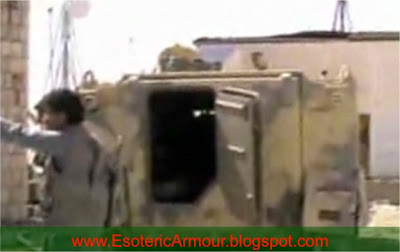 M113 found by Houthis fighters having captured Yemeni army base in the mountains in September 2009.

The Yemeni government has also faced violence a further insurgency in the South, relating to a renewed separatism in the form of the "Southern Movement". 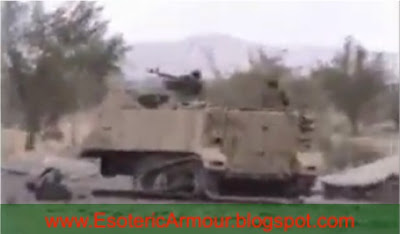 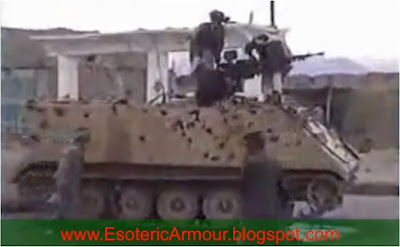 Reportedly taken in 2011 in the Southern town of Ja’ar this “Northen Yemeni”(assumed Government) M113 is shown after being reportedly being immobilised by RPG rounds, note the destroyed front left hand drive sprocket, road wheels and track.   Those personnel alive inside surrendered and the vehicle was then totally destroyed.


Any further information or pictures relating to M113s in Yemen would be greatly appreciated.
Posted by Mandrake No comments:

A number of photographs reportedly showing anti-Gadaffi forces on 05/10/2011 on the frontline near Sirte show them in possession of a state of the art Khrizantema-S tank destroyer.  This is thought to be one of only three examples delivered to the Libyan Army by Russia prior to the civil war and subsequent UN arms embargo.


The Khrizantema-S is based around the 9K123 missile system which is mounted on a modified BMP-3 chassis.  The main element of this system is 9M123/AT-15 Springer missile. variants of this missile are either laser or radar guided, contain either a tandem HEAT warhead (to counteract tank slat or [explosive] reactive armour) or a thermobaric warhead for unarmoured targets.   This system represents one of the most advanced and capable anti tank systems in operation. It was due to enter service production in 2003/2004 for the Russian Army, however few if any are believed to be in operational service.   Libya is the only known export customer and even this  was not known about until recently.


A useful video demonstrating a [Russian operated]] Khrizantema-S in action, including the various elements being deployed can be found here


In 2009/2010 Russia and Libya agreed a large arms deal, reportedly worth $1.8million (USD).  The exact types and quantities are not fully know although a number of anti-ship missiles and advanced Yak-130 jet trainer/light attack aircraft were believed to be included (SIPRI).  However this lone vehicles is the only clear visual evidence of any modern equipment being actually by Russia delivered prior to the conflict, although smaller arms and ammunition may of gone unnoticed.


Last month a Russian media source reported that three Khrizantema-S had been delivered to Libya (Когда говорят премьеры, пушки молчат / English Translation).  It is unknown how many more were due to be delivered or the fate of the other two units.  Furthermore it is not certain if this vehicle was captured at some other time or place or during the advance to Sirte.  In the case of the latter, it could indicate that loyalist forces have managed to retain/kept back some of their more potent and advanced weaponry.


Whilst this system provides anti-Gadaffi forces the means to disable any remaining loyalist armour over a long range in open terrain, it is unclear if they appreciate what they have captured or if they have either the technical ability and/or missile rounds available to deploy it to any great effect. 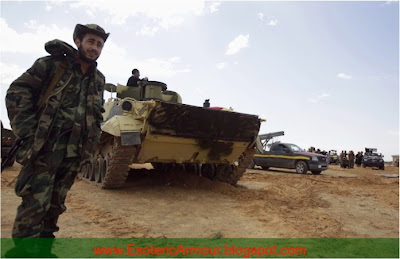 Posted by Mandrake No comments: