Recent photographs of US made M113 Armoured Personnel Carriers in Libyan service during the current Civil War have caused some surprise amongst spectators.

The relationship between the Libya and the US deteriorated in the 1970s due to Libya’s involvement in state sponsored terrorism.  This resulted in a US arms export ban and the suspension of a number of impending equipment transfers.  The extent of military deliveries prior to such restrictions is unclear.  Libya did receive a number of US aircraft types after this time, however the majority of these were delivered and/or manufactured (under license) via Italy.

The source and number of M113 deliveries is therefore uncertain.

In regards to the source of these Libyan M113s a number of possibilities should be considered:
a) Imported by either Italy or Brazil, both of which operate the M113 in large numbers and are known suppliers of military vehicles to Libya.
b) Supplied by one of Libya’s allies in the Middle East and/or Africa.
c) US exported before restrictions.

Before the Civil War and with the recent thaw in US/Libyan relations, Libya reported sought a deal to refurnish/upgrade 50 M113s, thus giving an indication of minimum numbers. A photograph of an M113 being transported, via a low loader, to the Benghazi on or around 18 March 2011.  The green flag indicates that it is being operated by pro-Gaddafi forces. Free Libya Rebels gather around two M113s.  Neither of these vehicles are identical to the one above although may be part of the same convoy.  The circumstances of this photograph are unclear but the rear M113 has clearly suffered severe damage. A further photograph of the damaged M113, now removed from the trailer and left abandoned by the side of the road.  It is unknown if the other seemingly undamaged vehicle was put into rebel service. 
From a 1/35 scale modelling perspective……

There are numerous M113 variants available from a range of manufactures, however the Tamiya and Academy offering are generally considered the best.   Libyan examples are likely to represent early M113/M113A1 so choose accordingly.

In regards to the likely origin of Libyan M113s it seems increasingly likely that there were exported direct from the USA prior to any restrictions.  This is based primarily on the following two factors.

1. Closer inspection of the photos indicates that these are the early M113 base variants (as opposed to the M113A1 introduced in 1964), indicates by the thin front headlight bracket/guard.
2. SIPRI indicates the delivery year for these vehicles as 1966.

Although it has been also pointed out that Italy licensed produced M113s, although I cannot be certain, it seems unlikely there were exporting or manufacturing such base models in the mid 1960s.

Between March and April 2011 a short but bloody second civil war occurred in the Ivory Coast.  There are a number of historic underlining causes to this conflict but the much delayed and disputed November 2010 election was a key trigger.

The initial results indicated that opposition leader Alassane Outtara had won the election and he was internationally recognised as the president elect.  However Laurent Gbagbo, the incumbent president since 2000, claimed that results were invalid and went on to claim victory after the results in several northern (opposition) regions were cancelled thus giving Gbagbo a narrow victory.

Despite domestic and international pressure Gbagbo refused to step down and stayed in power through the continued support of his generals.  Following months of failed negotiations and sporadic violence the situation developed into civil war between forces loyal to Gbagbo and those loyal to Outtara.  The conflict quickly de-esculated after the arrest of Gbagbo by Outtara forces on 11 April 2011.

UN and French forces were also present, acting in self defence and in the protection of the civilian population.

Analysis of available photos of BMP-1 in Ivory Coast serivce suggest they are probably BMP-1P variants or at least upgraded to a similar standard.

This conclusion is based upon the presence of extra turret armour, the six 81 mm 902V "Tucha" smoke grenade launchers on the rear of the turret and the mountings on the front for KMT-10 mine plow, although there is no suggestion that this attachment was ever delivered to the Ivory Coast.

These upgraded models were less commonly exported, often only becoming available in the post cold war era from ex-Russian or ex-Soviet republic stock.  In the case of Ivorian BMP-1s it is reported that 13 examples were imported from Belarus in 2002/2003.  Belarus apparently upgraded some of their vehicles to BMP-1P standard at a former soviet repair workshop. 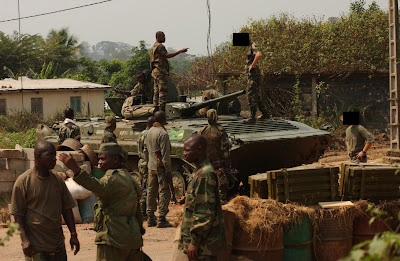 The BMP-1 above is reportedly operated by forces loyal to President Gbagbo, presumably the national army.  Note the crocodile head artwork and the hand written wording on the side, the meaning of which is unclear.  The presence of apparent foreign personnel with their faces blacked out is also interested, these may be mercenaries hired by Gbagbo. 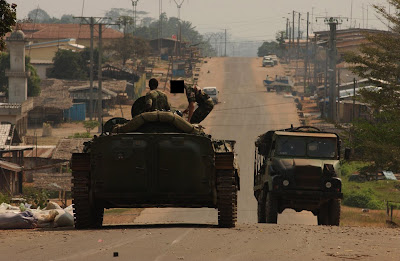 Another BMP-1 again pressumably of the national Army.  This is possibly the same example as in the previous photograph based upon similar stowage at the rear of the turret, indications of similiar writing on the side and a similiarly censored individual! 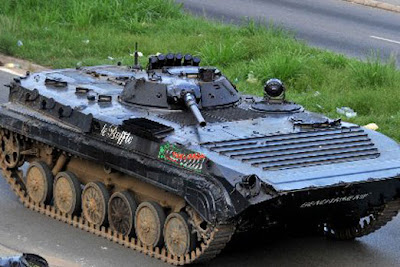 A further BMP-1 belonging to forces loyal to Gbagbo.  This is example however belongs to the Gendarmerie (National Police) as indicated by the white writing on the front.  The Ivorian Gendarmerie is similar in size to the army and in times of national crisis would be used to reinforce it.  It features an unusual overall black paint scheme and the vehicle is named “le Buffle” which translates as “the Buffalo”.  Crocodile head artwork also features on this BMP-1 although the design is different to the previous army example. 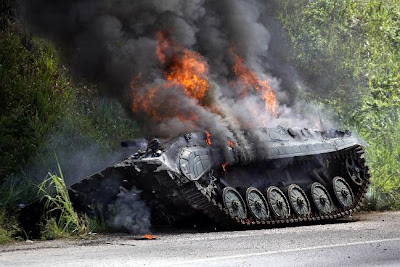 A destroyed BMP-1 in the capital Abidjan.  Some captions of this photograph have stated it was knocked out by French Gazelle attack helicopters.

Open source research  suggests that total of three BMP-2s reportedly delivered to the Ivory Coast.  The first delivery was for two units from Angola in 2002.  Angolan BMP-2s were received second or even third hand and came from a variety of former soviet republics.  This was followed by a single unit from Ukraine in 2003.

Judging from photographic evidence, at least one BMP-2 was destroyed between 2002/2003 during the first Ivory Coast civil war.  The single Ukrainian example could therefore be a direct replacement. 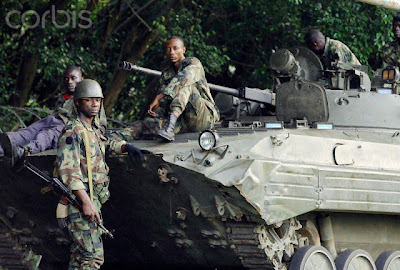 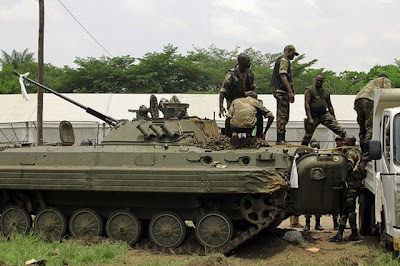 “Pro-Ouattara fighters of the Republican Force of Ivory Coast ride an armoured vehicle BMP-2 as they prepare for an assault on the residence of Ivory Coast strongman Laurent Gbagbo in Abidjan, on April 6, 2011.”

There are a number of interesting elements present in this picture.  The BMP-2 itself clearly shows the presence of additional [appliqué] turret armour.  Similarly to the BMP-1 it is unusual to see exported up-armoured examples exported unless from ex soviet republic stock.  Secondly is the two visible pieces of white material tied onto the vehicle, one at the end of the barrel and one next to the rear door.  This could be interpreted as flag(s) of surrender, suggesting the vehicle has been recently captured and/or the crew defected over to forces loyal to Outtara.  No markings are visible, although if they are present, such as the crocodile head artwork, they may only be present on one side, the left side, as visible in the earlier BMP-1 photographs. 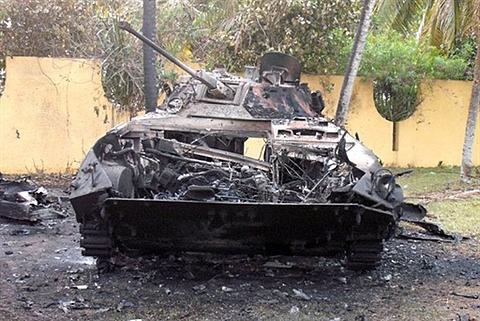 “A picture released by the French spokesman for Laurent Gbagbo on April 7, 2011 shows a burnt out tank reportedly in the gardens of the residence of Laurent Gbagbo in Abidjan." (AFP image)

If the captions for the above BMP-2 photographs are accurate it could indicate that they are photographs of the same individual vehicle, just a day apart. 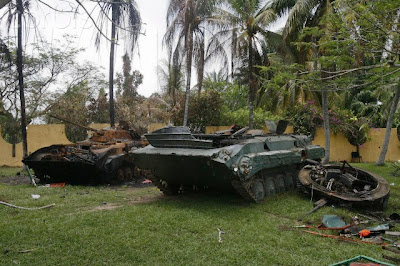 The BMP-2 on the left is the same one as the previous photograph although comparison of the two images indicates this was taken some time later, supporting the dates provided.  The BMP-2 on the right however may well have taken part in the actions leading to the arrest of Gbagbo.  The damage shown for the vehicle on the right is consistant with an impact from a dedicated anti-tank missile.

The information above is slightly conflicting because if there were only three BMP-2 delivered, one of which was destroyed in 2002/2003 then there should of only been two units potentially active in the second civil war.   If one was already in Ouattara service on 02/04/2011 (as per caption) and another on 05/04/2011 (as per caption and indication of white surrender flags) then it does not explain why the French/UN forces would knock out knocking out a third [Gbagbo] example.  So either a) more than three were delivered b) some of the indicated dates are inaccurate c) both BMP-2 destroyed at the Gbagbo's residence were infact loyal to Ouattara.
Posted by Mandrake 2 comments: