The AuF1 is a SPG (self propelled gun) artillery unit is based upon the hull of AMX-30 MBT (main battle tank) but incorporating a new much larger turret to accommodate a 155mm/39-caliber gun with automatic loading system along with 42 rounds of ammunition.

Although it was conceived and designed to meet a French Army requirement due to an exclusive deal it was actually Saudi Arabia who received the first units with deliveries of 51 units beginning in 1978.

Iraqi AuF1s were known to have been employed in the Iran-Iraq war, for which they were specifically ordered for, where the accuracy and 23.5km range of its gun reportedly proved very effective.

Whilst it is expected they played a role in the Invasion of Kuwait and subsequent Gulf War (1990-1991) no details of such service and potentially losses are readily available.  Their role, if any, against the 2003 invasion of Iraq is also unclear.

However what is clear is that a number of AuF1 survived both conflicts relatively intact and this may be attributed to their potential lack of operational status following the arm embargos since the invasion of Kuwait which would prevent spares and support from the French manufacture.

This is evident from the large number of photograph of derelict Auf1s that have emerged since the 2003 occupation.  It is in fact one of the most photographed types, presumably due proportions of the 155mm gun.   The majority of these examples reside within Camp Taji (formerly a republican guard base) often in long rows.  Here are some of the better photographs I have identified: 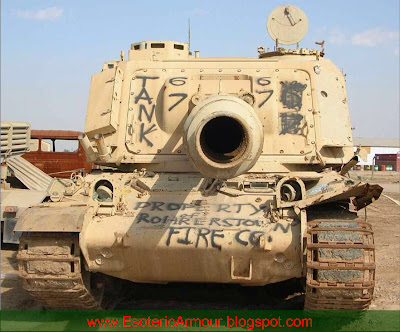 In regards to the turret mounted machine gun, it has been highlighted that in the early parade photograph that no gun or cradle is mounted.  This therefore raises the possibility that it was a later Iraqi addition thus widing the range over which gun could of been fitted, including the russian DShKM.

The Sri Lankan Army (SLA) previously operated an unknown number of Daimler Mk.II Armoured Cars.  However there is very little information available about their service with the SLA.

Daimler Armoured Cars were designed and produced in the United Kingdom during WWII with a total of 2,694 (Mk.I&II) being built.  They were exported to a handful of countries, with some staying on in British service into the 1960s.

It is unclear when the SLA first received its Daimler Armoured Cars or in what numbers.  They may have been handed to Ceylon Defence Force (the colonial precursor to the SLA until 1949) during British rule or possibly exported later following independence.  It is equally unclear exactly when these WWII era vehicle were withdrawn from active service, although it would appear some examples were operational into the 1990s and possibly early into the next century.  The SLA may also retain one or more examples in workable condition for ceremonial duties.

By far the most common and often only photographed SLA example is the remains of “AY4277” at Elephants Pass in Northern Sri Lanka.  There are a large number of photographs of this particular vehicle available online, many more than I have displayed in this article.  Although it might appear that there may be more than one example, closer inspection indicates it to be the same vehicle.

Elephants Pass is a strategically important military base connecting the Jaffna Peninsula to the rest of the island.  Consequently it has been the scene of much fighting between the SLA and the Liberation Tigers of Tamil Eelam (LTTE) also known as the Tamil Tigers during the Sri Lankan Civil War.

It is not known quite how or when AY277 was damaged and immobilised in this position.  Reports that the vehicle struck a mine are often cited but I am not convinced the damage is consitent with this.  The vehicle was probably damaged in the first battle of Elephant Pass (1991) which was an unsuccessful attempt to capture the base by the LTTE or the Second battle of Elephant Pass (2000) in which the LTTE succeeded and not only captured the base but also a number of SLA equipment.


LTTE relocation and refurbishment of AY4277

Whilst the area was under LTTE control and some point between 2006 and 2009 AY4277 was relocated next to the main road near to the road sign for Elephant Pass.  It was also refurbished to some degree, however it appears such efforts were purely cosmetic and that the vehicle was not repaired to a workable operational standard.

The purpose of such efforts would likely either be for LTTE propaganda and/or to act as a decoy against Sri Lankan government forces. 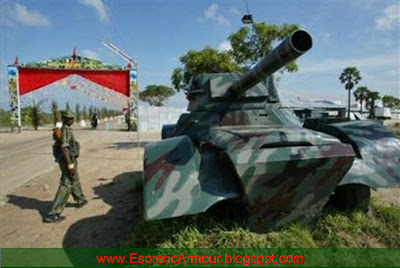 Study of the available photographs indicates the following modifications were made: 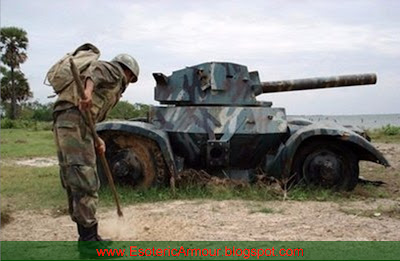 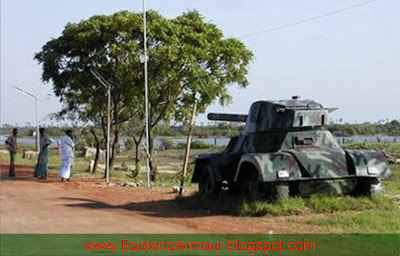 This vehicle is still assessed to be AY4277, primarily due to the reworked rear engine section, which was destroyed and the rearwards facing turret.

The only other example of an SLA Daimler Armoured Car I have been able to identify is a preserved example at a SLA base.