The Malian army has been reported to possess an unknown number of T-54/55 MBTs (main battle tanks).  The usage of this collective term refers to two types that are outwardly very similar and the difficulty to distinguish visually between them.  It does not necessarily indicate the presence of both T-54 and T-55 tanks.

Analysis by the author, based upon the limited imagery available, has however identified only the presence of T-54Bs in Mali. 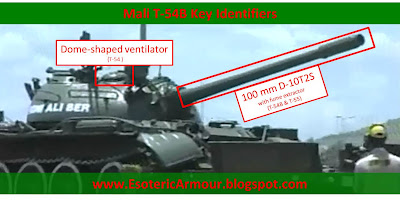 The only known imagery available of this type in Mali relates to footage of two events in 2010 and 2011 which show three, possibly four, separate T-54B examples

Three T-54B tanks took part in the parade on board tank transporters.  In common with other hardware displayed during this parade each were named after a settlement and/or local historical figure.


The current operational status of any T-54Bs in Mali is unclear with no imagery to indicate their involvement in the recent conflict in the North of the country.