Recent images from Libya appear to show a Centurion 105 AVRE tank in service with Anti-Gadhaffi forces.

Libya reported received ten Centurion Mk.3 tanks from UK in 1957 (SIPRI).  However the photograph clearly shows the presence of the 105mm main gun, which was only fitted as standard to the Mk.5/2 variant and beyond.  SIPRI has been known to make errors regarding Centurion versions in the past, however in the absence of any historic imagery of Libyan Centurions I am unable to verify this.  (There are historic images of British army Centurions operating in Libya, which should not be confused for actually Libyan army Centurions)

What is apparent is that the Libyan example(s) is an engineer support version, or AVRE (Armoured Vehicle Royal Engineers) as it was known in British Service.   At the front is a hydraulically operated multi purpose dozer blade with a fascine cradle mounted just above it (fascine being a bundle of branches or piping often used to bridge a void such as a trench of stream).   The majority of British Centurion AVREs were also fitted with a 165mm main gun for demolition purposes and not designed to engage enemy armour.   However in order to meet demand some frontline Centurions were retro fitted the dozer blade and cradle whilst retaining their standard 105mm gun, sometimes referred to as 105 AVREs.  The pictures available would suggest one of those conversions.

Whilst Centurions AVREs were exported in small numbers to several countries, it is unclear which received the 105 AVRE variant.  The possibility that further conversions occurred specifically for export customers should also be considered.

However due to the long running arms embargo against Libya it seems highly unlikely that this example(s) was exported to the previous Libyan state by the UK, especially given what appears to be a later version of the dozer blade mounted.

Therefore this example(s) was probably supplied direct to Anti-Gadhaffi forces in recent months.  Some observers have suggested that they might be of Jordanian origin, with Jordan believed to be one of the many countries providing equipment to Anti-Gadhaffi forces as well as a long standing operator of the Centurion.  Jordan is reported to have received a total of 355 Centurion tanks over the years (SIPRI), including a dozen Centurion AVREs in 1972, believed to be ex British army examples.
The photo below shows two Jordanian 105 AVREs (or similar) during a recent parade, which clearly shows the similarities to the Libyan example. 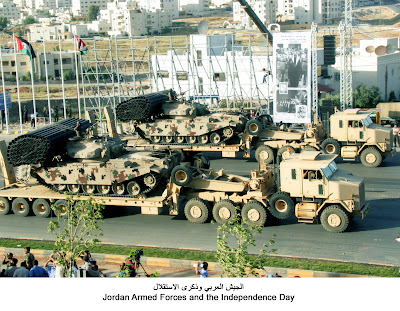 Please note that I am not indicating that Jordan is definitely the supplier, simply that the suggestions made by others is plausible.

Related Articles:
Another Centurion in Libya

In the 1960s Israel and Uganda developed a brief but surprisingly close relationship.  Uganda’s location was of value to Israel due to its border with Sudan, an opponent of Israel having sent troops to fight against it during the 1948 war of Independence.  Access to the southern Sudanese border provided Israel a supply route to aid the separatist Southern Sudanese liberation movement and undermine the ruling government.  In return Uganda benefited from Israeli expertise and aid.  This included military advisers and some military equipment.

In 1969 Israel agreed to supply Uganda with 12 WWII era Sherman tanks which were  delivered the following year (SIPRI).  These are believed to be the first tanks ever in Ugandan military service.

These were all believed to be the M4A1(76)W variant of the Sherman.  Some of these examples had the early suspension (VVSS), whilst others featured the later suspension with wider tracks (HVSS).   In Israeli Defence Force service these would have been collectively known under the designated M1, presumably in reference to the 76mm M1 main gun.  By the late 1960s these M1s had received some minor Israeli modifications, primarily in the form of turret additions.  These included two pairs of smoke dischargers, a search light mounted on the gun mantle and spare track links.  The search light does not however appear to of been fitted to Ugandan examples, though the mounting brackets remain. 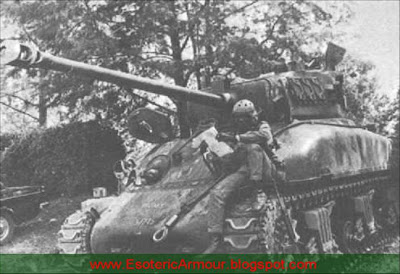 Within a year of the tanks being delivered Idi Amin seized power in a military coup, the role of the Shermans in this action is unknown.  Although relations with Israel initially remained relatively positive, Idi Amin went onto expelled the Israeli military advisers in 1972.  Some sources suggest this was in direct response to an Israeli refusal for either economic aid or military supplies.  After this Idi Amin became openly hostile to Israel, providing troops to support Egypt and financial aid to other Arab states during the 1973 Yom Kippur war.  The infamous 1976 Operation Entebbe raid would cement the end of Israeli-Ugandan relations for the remainder of Idi Amin’s reign.

The following series of video captures are taken from 1974 French documentary on Idi Amin.  During this scene he describes how he would retake the Golan Heights from Israel.

This rare footage provides the only colour images of Ugandan Shermans in actual operational service.  They clearly show an overall dark green, perhaps even a bronze green, paint scheme.  Registration numbers appear in white on a black rectangular background and are located centrally on the front and back of the vehicle.  Large painted squares/rectangles split diagonally into green and red are also present on several locations and may represent unit markings. 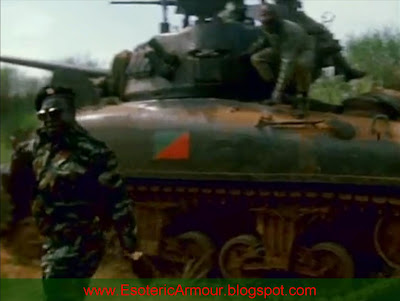 There is limited information about the operational history of Ugandan Shermans and it is unknown when they were withdrawn from service.  It is believed that at least some were involved in 1979 Uganda-Tanzania War also known as Liberation War, where Tanzanian forces and Libya exiles removed Amin from power.  Some derelict example(s) seen on the roadside near the capital Kampala are reportedly from this conflict.

Additional it should be remembered that these were already old vehicles when they entered Ugandan service, therefore maintenance and spares may have reduced serviceability.  Additionally although these may have been Uganda’s first tanks they were not to be their last.  Following the deterioration of relations with Israel, Uganda switched suppliers receiving more modern tanks such as 50 PT-76 light amphibious tanks and 16 T-54 main battle tanks between 1974-75 from the USSR.  A small number (~ten) of WWII era T-34/85 were also delivered, probably from Libya (SIPRI).  Other armoured vehicles were procured during this period.

The following two photographs were taken by David Blumenkrantz (http://www.daveblumenkrantz.com) and used with his permission.  Taken in 1987 they show a derelict HVSS Sherman on a road North of Kampala.  Although in black and white there is some evidence to suggest a two tone disruptive camouflage scheme, although this could be result of exposure to the elements or some creative post service painting by locals.  Unfortunately there are no colour originals and the photographer cannot recall the what colour(s) it was painted.

The next two images appear to show the same derelict example as before, albeit later than David’s 1987 captures.  Although there are some inconsistencies between the images the elapsed time might account for such changes. 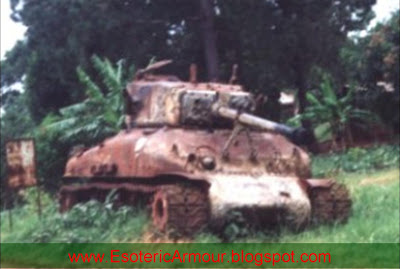 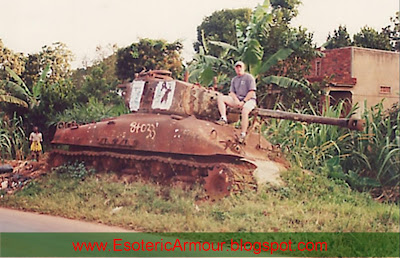 Any further information regarding Ugandan Shermans would be greatly appreciated.