Another Centurion in Libya 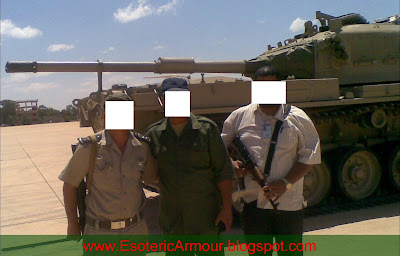 The presence of 105mm main gun in the images indicates this is a later variant than the Centurion Mk.3s that Libya received from the UK in the late 1950s.  A previous article (Centurion AVRE in Libya) highlighted the presence 105 mm Centurion AVRE (Armoured Vehicle Royal Engineers ) in Libya, with Jordan identified as a possible supplier.  Whilst AVRE associate features (dozer blade and fascine cradle) may have been removed the presence of large headlight guards would interfere with the operation of these features and therefore this example is not assessed to be another AVRE example. 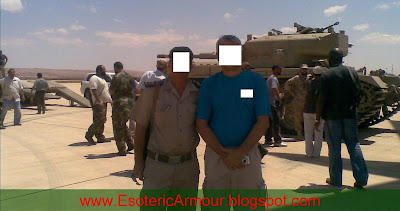 
The raised engine deck suggests this example has been upgraded with AVDS-1790 series diesel engine as featured in M60 Patton tanks.  This engine upgrade was adopted by several Centurion operators.

In the case of Jordan, this upgrade when combined with other less obvious ones, created the Tariq variant of the Centurion tank.  Jordan completed three hundred Centurion conversions to Tariq standard by the mid 1980s.  The distinctive headlight guards seen on this example also appear on the Tariq tank.

A further upgrade, the Tariq II, was considered for some time, but ultimately the Tariq was replaced by an order for the Challenger 1 tanks from the UK in 1999.  Although withdrawn from front line Jordanian service many Tariq hulls went on to be were converted into (Al) Temsah APCs, whilst a small number 105 AVRE (also believed to have been upgraded to Tariq standards) continued to serve in their specialised role.

However considering the presence of this example, it is possible some Tariqs may have been kept in reserve, possibly to serve as spare parts.  The condition of this example which is missing several distinct parts ( including turret stowage boxes and side skirts ), might support this.  If these images were taken in August, as suggested, it is likely that they were received at or around the same time as the AVRE(s) which were first spotted operating in September.   The images also suggest that this example may have been just delivered; Benghazi being a port town and thus providing the most plausible method of delivery, a flatbed tank transporter is being prepared and also the censored photo opportunity presented, possibly between supplier and recipient.


Of potentially significance are the individals present in the photos, particulary the khaki uniformed man displaying military insignia (on the left in both photos).  Although the details of this insignia are unclear the shape and size does appear to potnetial match that of Jordanian Army Officer, most probably of Captain rank.